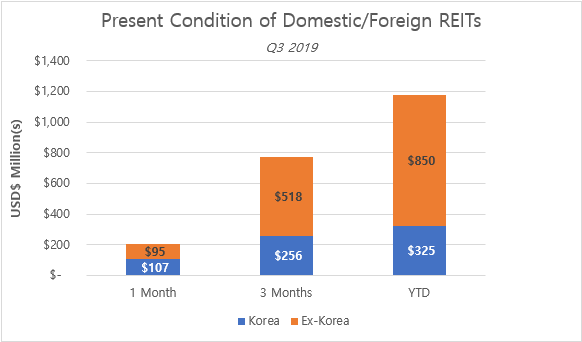 South Korean interest towards REITs (Real Estate Investment Trusts) continues to accumulate. Despite controversy over REITs principal loss in jurisdictions outside of South Korea, capital inflow to real estate funds has continued due to the instability of the stock market and low interest rates. It is expected that the popularity of REITs will be continued based on the announcement of the Government’s measure to vitalize REITs.

According to F&Guide on August 17, South Korean public real estate funds have net inflows of US $325 MM since early this year. In recent months, a net inflow of US $107 MM has been recorded . As such a total of, US $825 MM inflowed into REITs, as investors are turning to real estate outside of South Korea.

Real estate funds remain highly attractive, fueled by market instability and low interest rates. Since the beginning of the year, US $42 MM of funds have been concentrated on REITs, while domestic equity funds have lost US $627 MM, and overseas stocks have reached US $2 Bn., resulting in a yield of 1.28% for South Korean real estate funds, but 7.13% for real estate outside of South Korea.

The finance industry considered that concern for REITs would continue to increase as the Government set up the policy to activate an indirect real estate investment system. The government noted that the public real estate fund will apply separate taxation on dividend income to a limit of US $40,000 and reduce the tax rate from current 14% to 9%.

According to Kung-Ja Lee, a researcher at Samsung Securities, “The point of government measures is to lower the barrier of the entry of individual investors in the real estate indirect investment market by providing differentiated benefits to public offering”. He also said that “2-3 years will be golden era for public funds such as REITs.”