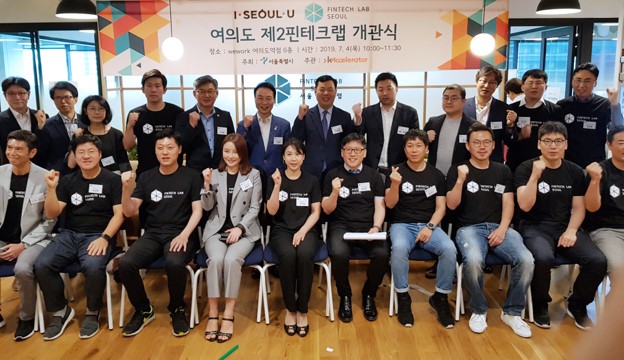 Recently, the Seoul Metropolitan Government Authority reviewed and selected applicants to be a part of the government’s second Seoul fintech lab locally at Yeouido station.  After a rigorous review and vetting process, DarcMatter (DM) was selected along with 13 other fintech companies, to participate in Seoul’s startup fintech hub at WeWork’s Yeouido station branch.

Last year, DarcMatter had the honor of being selected to participate in the region’s first Seoul Fintech Lab program in the Mapo District, created by the Seoul Government Authority to mainly target early-stage financial technology start-ups interested in expanding throughout South Korea. This year, with the second edition of the Seoul Fintech lab, the program is focused specifically on growth-stage financial technology start-ups already making traction in the local market.  Year two of the program also provides enhanced access to customized support for the company and its team, by utilizing the government’s reach and relationships with the local financial technology industry, in addition to utilizing Yeouido’s advantageous financial district location coupled with the strengths of WeWork’s global ecosystem.

DM’s WeWork location is centered in the financial district’s hub in Seoul, Yeouido.  The 14 selected fintech companies specialize in AI and blockchain development as core elements to the company’s financial technology.   In addition to government support and assistance provided by K-Accelerator, the local operator of Seoul Fintech Lab, selected companies benefit from private office space for up to two years and access to WeWork’s global network.

As the company enters year two of Seoul’s fintech lab, DarcMatter’s President and CEO, Sang Lee, commented “It’s truly an honor to be selected by the Seoul Metropolitan Authority to participate in the government’s 2nd incubation program.  When we were selected for the first program in 2018, were able to benefit from the support and services to grow our business throughout 2018. As we continue to build our blockchain consulting and development division, Konstellation, we look forward to benefiting from these enhanced support services from both K-Accelerator and the Seoul Metropolitan government.”